As Erin mentioned in the previous post, Aidan started storming a little yesterday and it got worse overnight. We found out the storms were happening because of a miscommunication between Northeast and Levine. Apparently, the orders for the Clonidine patches were set to be replaced every Monday, when they were supposed to have been replaced yesterday. This was partially due to Northeast changing the dosages. When the dosage was changed, the day for the patches to be replaced was reset. To quote Adam Savage of Mythbusters: "Well, that's your problem right there!"

They just replaced the patches a moment ago and they will now be replaced every Saturday. Wouldn't you know it ... they put the patches on and the storms have subsided! Isn't modern medicine incredible?

We just finished Aidan's bath and all I can say is there is definitely a learning curve involved when your active 28 lb. little boy is now 35 lbs. of dead weight. I thought getting ready to go somewhere was a process ... this is much more involved than that ever was! Between lifting/carrying him, supporting his head while bathing, changing his trach ties, and putting on new clothes, I was just about worn out! Throw in suctioning the trach when he was coughing and it was a massive production. I know this is something Erin and I will have to figure out, but today it was a lot more frustrating than I had expected.

Tomorrow we have yet another Reiki practitioner coming in the afternoon. There is no "scheduled" therapy on Sundays, so I gave them the OK to come. We can still do our own therapy session with Aidan, and will likely do some range of motion work before they arrive. 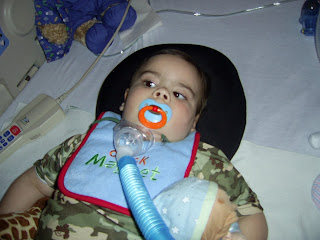 We just noticed Aidan moving his mouth in a chewing motion. He's done it before, but not nearly as much as he has done it this evening. Erin tried to give him his pacifier. You can see the picture of that attempt here. He took it for a little while, but he still "spit" it out. We think part of that is due to the weakness in the right side of his face. Erin was just happy to see him keep it in his mouth for a while. We were told by another POND (Parent of Near-Drowner) we need to introduce things into his mouth like pacifiers, baby toothbrushes, etc., so he will be used to the idea of that. It will help with therapy down the line.

Before I go, I will say that the therapists we saw today were very pleased with the range of motion Aidan has right now. He has almost full motion in both shoulders and his hips. His knees and elbows are also in good shape. His wrists are pretty good, but his ankles are very stiff. There are several possibilities for treatment of his ankles, including standers and serial casting (with or without Botox (yes, that Botox)). I am sure they will have a more significant plan of action for us come Monday.

He also has been coughing a lot more. He is swallowing some, but we will wait to see what Respiratory Therapy says about when they will start working on getting his trach out.

With that, I believe we will call it a night.