2 days left! I've been counting down the days until Aidan comes home. It's almost like bringing home a new baby, except mine is 2 years old and he weighs about 35 pounds. We're in the process of getting the boys room repainted and new carpet put down (long overdue), so it is chaos in the house. The new carpet will be installed Wednesday.

Aidan is doing well. His feet are great and he's been in the stander every day to stretch out the muscles and tendons that were so tight before. In OT today, the therapist had him sitting, supported, in front of a mirror. He doesn't have any head/neck control so she had to hold his head steady. He does pretty well with the position changes, and it gives him a chance to strengthen his neck, back and abdominal muscles by sitting.

During his afternoon therapy sessions today, a reporter from a local paper came to do an interview with us about Aidan. A photographer also came to take pictures of Aidan. We're not sure when the story will be printed, but we'll let everyone know when and we can post a link to the story on the paper's website.

I had an appointment at the Social Security office today to apply for SSI for Aidan. What a pain in the BUTT! I don't know what happened to the people that work there, but I think they were replaced with robots because they lack any personality, empathy or compassion. And did I mention how picky and technical they get!? And when was the last time a 2 year old had income? I don't know how many times I had to say, Aidan doesn't do ANYTHING on his own. No, he doesn't talk; No, he doesn't walk, run, sit up, stack blocks, etc. ; No, he isn't affectionate--- I don't even know if he sees me, let alone him being affectionate. After repeating this about a dozen times the lady again asks me in this rather surprised tone, "He doesn't say No, or shake his head... he doesn't run?" UMMM, NO! He doesn't. My child lies in a bed, or he sits in a special seat to support him or he sits in a wheel chair. He has to be positioned so that he doesn't develop sores because he CAN'T MOVE! I'd love for him to sit up in that bed and say "hey." But unless God works a pretty major miracle, I don't see that happening any time soon. After going through this and his extensive list of medications and doctors, I started to get upset. It took everything I had not to just sit there and cry. And the woman didn't say a single word to me about the fact that her stupid questions were upsetting me!

Okay, now that I've had my rant- I'm sure that not every single person who works for the Social Security office is like this. 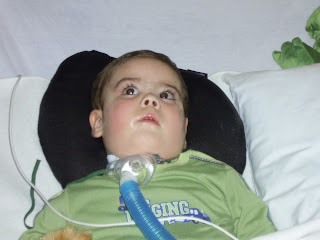 I'll leave you all with a picture of Aidan I took Sunday evening after Nana gave him a haircut and he had a bath. His little cheeks are red because he was mad at me for moving him.

We thank you for your continued prayers. Please pray that we see some improvements in Aidan once he starts the hyperbaric oxygen treatments. Also, please say a prayer for Evan. He's not been feeling well today and was running a fever. If he is the same tomorrow, I'm going to take him to the doctor. We appreciate all the love and support from everyone!

Russell,
I was on Cvilleok.com and found the link to the website with the update on your son. I was just wondering if anyone has talked to you about setting up some donation jars around Collinsville?? This is something I would like to get started if it hasnt been started yet. You are still in my prayers and thoughts.

No, nothing to my knowledge has been mentioned regarding setting up donation jars in Collinsville. If you want to do that, thanks in advance for doing so.

Good hearing from you.