Therapies, Throwing up, and Thunderstorms 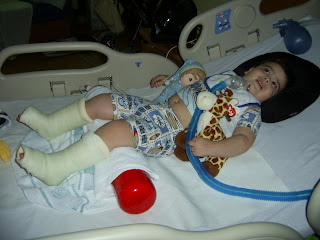 Today was a somewhat eventful day. Aidan was in Physical Therapy when he threw up suddenly. We're not sure what caused it: the fact that he had a feed at 8AM and went straight into therapy, Russell suctioning a little too deep, or a combination of the two. At least he proves that he has a gag reflex!

Then, Aidan got his serial casts on his legs this afternoon. As you can see from the picture, they are just like any other cast. The only difference is that these aren't being used to fix broken legs; rather, they are to reset his ankles so he will better be able to stand and, eventually, walk. He did not like having the casts put on, as they were really pushing on his ankle. They will remain on until Tuesday. After that, they may recast him depending on his progress after this round.

On the HBOT front, it appears we may be able to take Aidan while we are in the hospital at least once a day in the near future. We have to show we know how to suction and change his trach (the nurses have seen us suction, but they have not seen us change a trach here) and we have to have a car seat for him so we can perform the transport (will ask the vendor about that loaner seat Monday or Tuesday). Once one of the physiatrists talk with Dr. Corbier, we should be all set. We'll keep you advised.

To our friends and family back in OK, KS, MO, and TX, we have seen what all you have been going through with the weather. As usual, it's a double-edged sword: appreciative of the much-needed rain, but wishing all the other nasty stuff wasn't joining the party. We've had our share of rain here in NC, but not nearly as much nasty weather. Considering the drought that has been going on since even before we moved here, I definitely appreciate the wet stuff finally getting here. Be safe out there!
at 5:36 PM