It's been an interesting week or so. Aidan was supposed to start back with his hyperbaric treatments last Wednesday. We took him for the treatment on Wednesday and he seemed fine. The next day he was just irritable and fussy, and having storms off and on all day. He also started throwing up. Friday we took him and Evan both to the doctor. They both have ear infections. Evan's was just getting bad, but Aidan had apparently had one and it caused his eardrum to perforate so the infection could drain out. His doctor said that it was only in his right ear, but I looked in his ear yesterday and the other one seems to look a little infected now.

Both boys are on antibiotics and we're dealing with all the lovely effects of Aidan being on Augmentin (i.e. terrible diarrhea and infections around his g-tube). Aidan is still having bouts of vomiting. I'm not really sure what is causing it other than sinus drainage and the mucus on his stomach is causing the vomiting. He just acts like he doesn't feel good. I was able to lay with him on the couch last night and sing to him when he was kind of whiny and it seemed to help soothe him. I just hate that there isn't much I can do for him. I just pray he keeps his formula and medicine down each time we feed him.

For some other news, good and bad- We've put a deposit down on an apartment and we're supposed to move November 1st. The apartment is fully handicap accessible and both the boys will have their own room. I'm excited about having our own space again and I'm sure my mom is glad that she's getting her house back and will be rid of the toys and clutter.

The bad news- our chocolate lab, Bear, was hit last Monday night by a car. He was out running around the yard and we didn't realize he'd gone down to the road (we have a 2 acre yard). It was almost dark and the couple driving couldn't see him. Bear's heart stopped beating once I got down to the road, but had started again. Russell rushed him to the emergency vet but he was gone when he got there. The vet tried to resuscitate him several times, but they were never able to get a response.

Bear was my Valentine's Day present from Russell almost 6 years ago. He was a very lovable and loyal dog. Russell and I were looking into having Bear trained to be Aidan's therapy dog just a few days before he was hit. I've had Bear longer than I've ever had any other dog and we will miss him a lot. Here are a few pictures of him. I had some with him and Aidan together when Aidan was a baby, but I couldn't locate them. 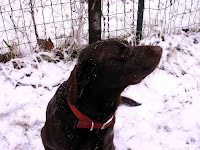 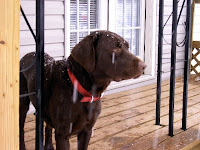 Thank you all for your unfailing support, love and prayers. We appreciate them so very much. I'd like to ask that you pray for a friend of mine who's husband has cystic fibrosis. He is not doing well and his doctors have given him 2-4 years if he doesn't have a lung transplant. Please pray that he is able to get on the transplant list and get this surgery soon. They just had a little boy in July. I'd appreciate it if you could say a prayer for them. Thanks!
at 4:59 PM

I am so sorry to hear about your dog! I had mine for 17 years before he passed on 2 years ago and it was like loosing a family member. :(
I pray that your boys can fight this infection they have and become healthy again.
Congrats on the new place too! That is going to be good for you all. Sometimes a move is just what the doctor ordered.
Take care and know you and your family are in my prayers everyday!
Cindy.

Erin, I am so sorry to hear about the loss of your dog! I'll be praying for your continued comfort and for Aidan and Evan's healing.

This is Janine, at TMA, I read your blog often and think of all of you even more often. I've never posted before now because I never quite knew what to say to either of you if I did. But today when I read that your dog died my heart broke for you all over again. I surely can't relate to having your child almost taken from you and watch him struggle for life but I can absolutely relate to losing a beloved dog. I keep all of you close in thought and when I send up a prayer you're family is always included. Your boys are lucky to have you both for parents, don't ever give up the fight, I believe you'll win.

Erin and Russell,
I have been silent for a while due to work pressure, illness, and lodging difficulties. But I'm back and I was so anxious to see how you all are doing.

Re: Bear.. Words cannot express how badly I feel for you. Dogs and cats too are just as much family as the humans in it. I grieve with you. My Kimmy was hit three years ago; she loved me more than any animal ever has and I still miss her so I TOTALLY empathize with you.

RE: the ***holed who sent that letter to you. Nothing could be farther from the truth and don't you believe a word of it! EVER! I'm sure in your darkest moments you have said some of those things to yourself. But the facts are you are devoted parents. You have done everything humanly possible to make both of your boys happy and healthy.. both now and previously.

One day at a time... one step at a time. We love you and think of you and pray for you.

Liz
PS If you write to me via the google address I won't get it very soon as I still use my antiquated pine program for 99.999% of my email. Works better for me! You have my regular email to use if you need to talk..