Hi everyone! I thought I'd post an update. Aidan is doing really well. Last Thursday he was in a really good mood all day long. He was smiling and cooing and "talking". He even rolled some from his back to his side when I went to give him his midnight meds. He's been moving his arms more and this morning when he did his usual stretch he raised his arms over his head instead of just stretching straight out.

We got a call from his neurologist Saturday afternoon, and we're going to start trying Ambien. We took him a few studies that talked about Ambien being used in patients with brain injuries. The drug is used to help people sleep, but in patients with brain injuries, it can actually "wake up" areas of the brain. People have reported more movement and talking in patients who normally didn't move or talk. We're starting out at a very small dose (1/4th a regular adult dose). We'll see how he does, but I'm hoping for some good results.

We have an MRI scheduled on the 1 year anniversary of his accident. He's also got a SPECT scan scheduled... I'm not sure if it's supposed to be the same day or a different day since he has to be put under anesthesia for imaging.

I can't believe it's been almost a year. Aidan has made a lot of progress and he has changed so much! He's grown a lot. I look at his pictures from last spring and he still looked so much like a baby to me. Now he looks like a big boy.

We got a new wheelchair today. I got a few pictures of Aidan in it. It fits him and his needs so much better than the other chair he had.

I've included a few pictures of Evan and one of the progress on the afghan. I'm almost done with it. I have to sew the squares together and do the border on it. My goal was to have it finished in time for Valentine's day. I'm still hoping to have it finished then. I'll probably list it on eBay as an auction and post the link to it here so those interested can bid on it. I think that's probably the easiest way. I didn't really think the whole thing through. 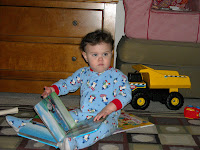 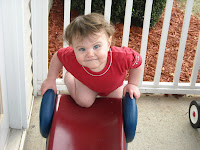 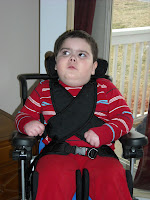 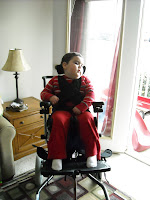 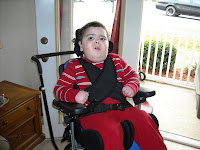 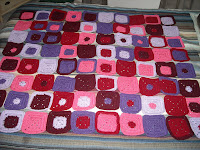 WOW! That's AMAZING progress!!! We're praying the progress gets even faster for all of your sakes, but he is AMAZING! What a little TOUGH GUY!!! And your afghan is beautiful, I think ebay is a great idea. Post the link here, and you'll certainly have bids! The photos are excellent, thank you so much for taking the time to do these things (updates, photos) - I'm sure you're exhausted most of the time, but we all appreciate it SO much.

Erin -
I was wondering if you could PLEASE email me, and let me know your phone number. I would like to call you! I am TOTALLY intrigued by the Ambien. After reading you post yesterday, I spent some time searching the internet for other info. I saw some good reports abouto the ambien being used with brain injury. I would like to know what dose they are going to give Aidan. Are you using 1/4 of a 10 mlg tablet, or of a 6.5 mg tablet? I really want to try it with Suzy. I have some Ambien. Suzy is not in a semi-vegatiative state (which it appeared that the cases I read were in). She is still VERY LOW cognitive function, though. I guess a lot like Aidan.?
How often are you going to give it to him, and for how many days are you going to try it?
I would LOVE to see Suzy move some more, or even start some VERBALIZATION!!! That would be HUGE!!
Anyway, if you could please write me back, or let me know your number and I could call you, or you could just tell me the answers in an email.
My email - boozes@cox.net
My number - 757-471-9434
My website - www.suzybooze.com

Hi Erin,
I was wondering if you had a chance to see my post.?
I'm not sure how often you check in, but maybe you have an email that I could write to you?
I was going to start giving Suzy an ambien today (sunday), but I was waiting to hear from you.
I guess i just wanted to know if the dose was 1/4 of a 10 mg tablet?
And I wanted to know when your neurologist thought you should try it, and what time of the day?
Thank you so much for taking the time to answer.
Peace,
Whitney