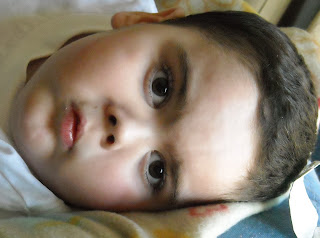 Aidan is doing so much better now. I had to take him back to the doctor on Thursday because his oxygen level kept dropping into the 80's and he was wheezing. We ended up coming home with a precription for Singulair and with an order for Aidan to wear oxygen at night and if his sats dropped below 90.

Wouldn't you know it, we have all the oxygen stuff brought in and he hasn't even needed it, not even at night. His O2 levels have stayed up above 95 during the night and they haven't been dropping during the day either. I'm telling you, he's a stinker! I'm beginning to think he just likes going to the office to have all the nurses tell him how handsome he is and to rave about his eyelashes!

The respiratory therapist came out today to teach me how to use the percussion vest on him. It's this vest that is inflated with air and it vibrates to loosen any junk in his lungs. Because he's had so many infections in the last year and isn't coughing as often as he needs to get the stuff up, they suggested this. He liked it. It makes him look like I sat him on top of the washing machine on the spin cycle the way it shakes him, but he was so relaxed during and after the first 20 minute session.

I got a few pictures over the weekend of the boys. Aidan was in a really good mood the other day and smiled a lot so I was able to get some good pictures of him. Russell and I took Evan to the park yesterday afternoon. We left Aidan home with the nurse since there were a lot of air quality alerts here and I didn't want to risk him having another allergy or asthma attack. Well, for now that's all that is going on.

Aidan should be able to go back to pre-school on Wednesday. Friday morning he has an appointment with the pulmonologist. Hopefully we'll be able to schedule an allergy test and find out what all he is allergic to and I can get some more info about asthma.

Remember the raffle drawing ends Thursday night, as does the silent auction for the hearts afghan I did. Thanks to everyone who has bought raffel entries and who have bid on the afghan. The current bid on the afghan is $130.

Hope everyone is having a good week! I'll post more in a few days. 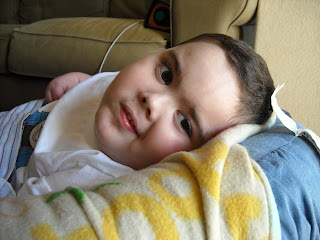 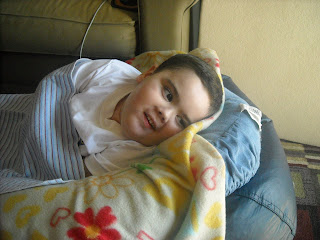 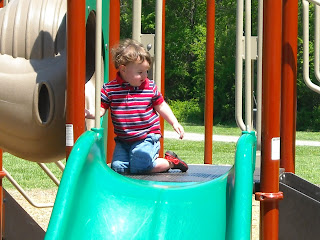 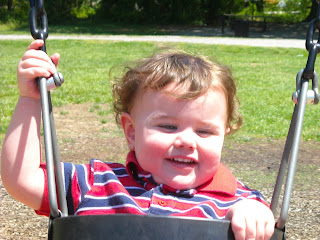 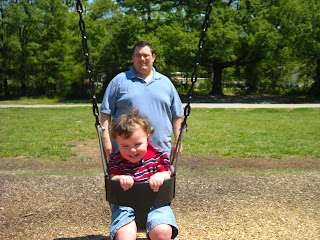 The pictures are great and that first one of Aidan is priceless. He looks so adorable. I'm glad the oxygen sats are so much better now.

It is very nice to hear good news! Love the smiles he is handing out!
I must add that you are sounding very good yourself!
Cindy.

Justine has been using the vest for about 4 years now. Not one pneumonia since we started it. She too thinks it is funny. Great pics, love the smiles they make all the work so worth it.

Sorry my son uses the google account I am Jodi not Jacob. WWW.caringbridge.org (justinepesicka)