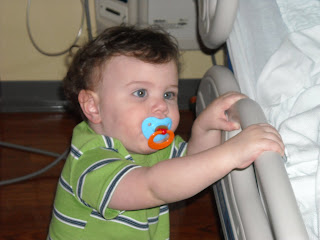 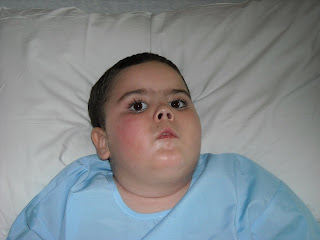 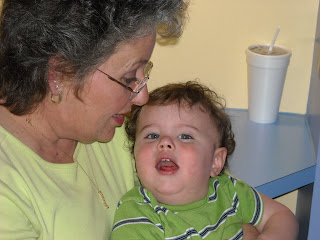 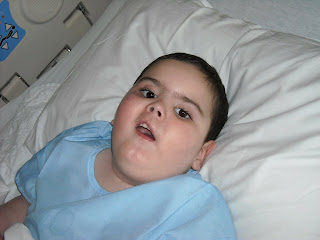 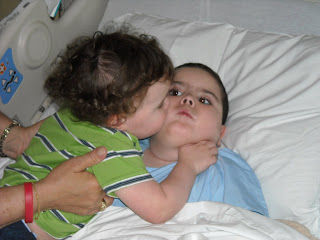 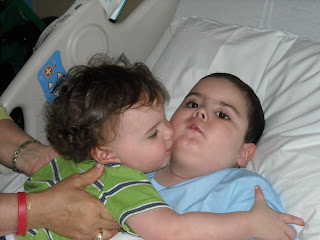 Aidan was taken off of oxygen today and is now on room air. He's getting breathing treatments about every 4 hours and is still getting antibiotics, but they said once he was off of oxygen for 24 hours he could come home. So hopefully he'll be coming home tomorrow! These are some pictures that I took this afternoon. You can tell Aidan is feeling much better. He was actually smiling and looks and sounds much better than he has in a while.

He was even making sounds and moving his lips and tongue like he was trying to say something. My mom swears he said "mama" the other night. Sometimes he does make sounds like that, but I never know if they are intentional or not. I'd like to think he's saying "mama".

I've been pretty much a basket case lately. I cry just looking at him. I want to put Aidan in a bubble to protect him and make him better. I just miss him. I'm missing the little boy I know he would be today if he'd never had this accident. It's so hard to see other little boys around Aidan's age, and they are running and playing and doing typical 3 year old stuff. I just want to tell their parents to hold on and never let go of those memories because they're gone in a flash.

I've read too many stories lately about other children who've had near-drowning accidents who've recently died from complications. I also just learned of a family who's 2 month old slipped under the water in their bath with the parent turned away. I'm not blaming and I'm not judging, because at some point, we've all done it. The phone rings or we forgot to grab a towel or something and you turn your back for what you think is just a second.... but it's never a second. Whether it's a bath tub or a pool or a pond or a lake, or a bucket.... never leave your child alone around water. Never think that it'll just take a second or that it could never happen to you because you're not THAT kind of parent. It happened to us and it's happened to so many other good and loving families, and even worse is that it happens to innocent children who are abused.

I hate to turn this posting into this, but I just felt the need to pass along that warning. Warmer weather is here, and the number of drowning and near-drowning accidents increases. Please just be aware.

(This neurotic-mommy warning brought to you by Erin)

Back to the issue at hand, Mr. Aidan coming home! I'm ready to have him home, sleeping in his own bed. Thank you each and every one for the prayers and the concern. I've had so many people asking me how he's doing, and I really appreciate it.

What precious boys! Aidan is looking great, I hope you get out of there tomorrow, I will praying that will happen.

Boy could I totally relate to your post today. Just today I took the kids to the park and was close to tears as I sat there wondering where Luke would be if he was a "normal" child??? The pain does get better with time, but I don't know if it will completely go away.

Just know that I have been praying for you and your family a lot lately.

Thank you for your 'neurotic' posts, Erin. I believe that I take precautions that I probably would not have if I haven't been listening to you this past year. You ARE helping people by posting messages like these. I'm different because of them. The photo of Aidan smiling really big MADE MY DAY! How GORGEOUS!!!