Dr. C called me this morning with Aidan's MRI results. He said that the larger (older) hematoma was completely gone. But the other area, on the right side of Aidan's head is a little larger. Since we have no idea what caused the bleeds, we're going to have to go to a hematologist for some tests. Hyperbaric treatments are on hold until we have that appointment, just to be on the safe side.

I decided yesterday to set up the bounce and slide for Evan to play in since we had a swarm of wasps outside our patio and didn't want to risk him getting stung. Aidan's nurse suggested putting him in the bouncer, so we put him in. She was able to get in with him. He seemed to enjoy it. We bounced him a little and he was completely calm and relaxed the entire hour he was in there. I got a few pictures of him using the camera on my phone since the batteries died in my other camera. 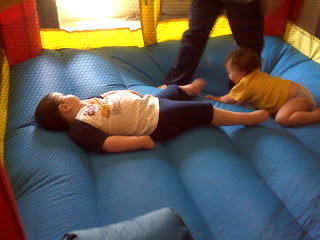 I had an older picture on my phone of Aidan too. I think he was smiling and I just happened to catch him with an amused look on his face. 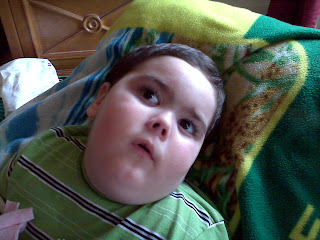 My prayers and thoughts are with you. What a beautiful boy you have!

I'm praying right now for Aidan, that his seizures will be controlled and that the Dr. will figure out what is causing the bleeding. He is looking real handsome. It looks like the boys had a fun time in the bouncy house.

BuzzEditions from Twitter suggested I read your blog. I'm not sure how to best contact you but if you need help, I would be happy to give you some guidance with your fundriaising efforts.

I help run a fundraising website called GiveForward.org. We have a lot of people on the site doing fundraisers for medical expenses. A young woman recently raised $30,000+ in just a few weeks and the Chicago Tribune subsequently dubbed our site "the future of medical fundraising in the Internet age."

Call/email anytime and I'd be happy to offer you advice on how to best spread the word about your fundraising efforts.

Our thoughts and prayers are with your family.