Sorry for my tardiness in this update everyone, but it is well worth it.

As many of you know, Aidan started on G-Therapy in March. These small pills are a homeopathic and ayurvedic therapy. The belief is that the ingredients have a significant effect on brain function. One child in India went from severely brain damaged after a hypoxic brain injury to completely normal in just under 18 months, so I have my hopes that this will make a major difference in Aidan's well-being. He is given 3 pills in the morning and 3 pills at night for two weeks then gets a week where he is off the therapy. The idea is to "shock the system" then give the body and brain a chance to recover. The closest analogy is that of weight lifting: work one part of the body for a day then switch to give that part you lifted a chance to recover and become stronger. 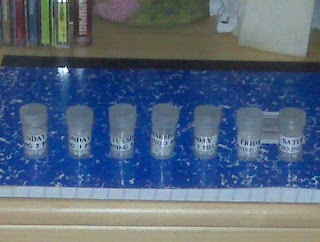 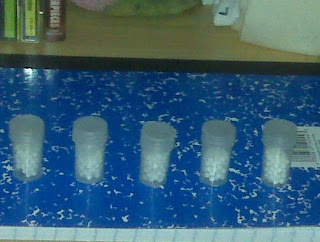 Evening Doses
I asked Aidan's nurses, as well as his teachers to make and note their observations while he was on therapy. The way I see it, if medical professionals and non-medical observers who see him a total of 16 hours a day see the same thing, it has to be due to this!

That being said, here's what they have seen:

But, perhaps the biggest change is that Aidan has started to communicate with us! Both at school and at home, we all have noticed that when he is left alone, he would start whining and fussing. Once someone would go over to talk to him, touch him, or hold him ... he would become quiet. It seems like a small thing, but it tells us that he is aware of his surroundings and is reacting according to them.

I hope you enjoyed this update. I promise to get the next one up a little sooner.

I think I stumbled on your page via Sharon Z's donation.

I think going with the ayurvedic therapy is an excellent idea and would like to also put forth another idea for you to consider.

Do you know your son's blood type?

I believe The Blood Type Diet could reduce the lectin and toxin load on your son's body, significantly assisting in his healing process.

Dr. Peter J. D'Adamo has been researching and healing his patients through genetic based diets for well over 20 years.

I would be happy to talk/write to you about this program if you are interested.

or via Sharon Zambito who has my E-mail address.

Sincerely,
Betsy A. Ross
aka "Sprocket"

Way to go Aidan. Great things are going to come your way. So glad the new treatment is showing some positive signs. Look forward to more great updates on what you have accomplished. Sherri